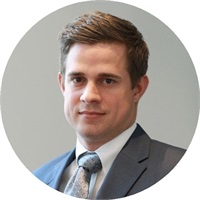 As customer service associate, Brendan Stringer is responsible for setting up your account, preparing forms for your trades and preparing materials for meetings with your Clarendon Wealth Management financial advisor.

A Vienna, Virginia, native, Brendan was a member of the first George C. Marshall High School soccer team ever to advance to the Regionals.

An avid sportsman, hiker, camper and snowboarder, he chose to pursue his education in Colorado, obtaining his bachelor’s degree in business administration at the University of Colorado in Denver in 2014 before joining Charles Schwab & Co., Inc., as an associate financial professional. While at Charles Schwab, he successfully pursued general securities licenses, Series 7 and 66, before obtaining his supervisory license, Series 9/10.

In 2017, he joined the staff of Ethos Financial Partners in Denver as lead trader, where he handled all trades for the firm’s 15 independent advisors and their clients.

At the same time, he also served on the University of Colorado Denver men’s soccer coaching staff, as both assistant coach and, eventually, head soccer coach.

He and his fiancé, Katie, live in Fairfax, where they are raising their two little girls, Cali and Colby.